Blog
You are here: Home / Blog / Uncategorized / MESSAGE #821 HOW SUDOKU CAN HELP YOU… 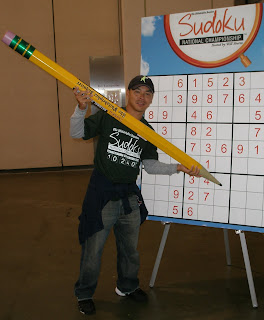 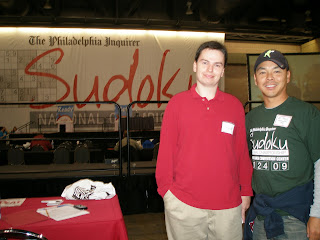 So yesterday I did a little mental cross-training and competed in the National Sudoku Championships in Philadelphia. I wanted to put myself in an unfamiliar situation to test my focus, relaxation and motivation.

It certainly did. I didn’t get much sleep the night before, but I did it anyway. There were some serious competitors there and my brain hurt after the first round. But I stood up, relaxed, made sure I was breathing.

Well I didn’t make the playoffs, but may have come in first for the bonus round for my city, Lawrenceville, NJ. That’s if I was the only entrant for Lawrenceville.

It was a great experience as there were 828 competitors as young as 8 and as old as 93. The came from 23 states and from as far as British Columbia.

I caught up with Thomas Snyder (above), the 2006 and 2007 National Sudoku Champion from Silicon Valley.

I asked Snyder how he prepared for the event. “The week before the competition, I do about 300-400 puzzles. I can do an intermediate to advance puzzle in a few minutes. For the finals, you have to write on this large Sudoku white board and there isn’t much room, so I built a make-shift one at home with tiles and whatnot to make it as realistic as possible.”

Another question I asked was if he gets nervous beforehand. “Yes, but I try to stay relaxed by singing songs in my head and give myself a little pep talk.”

“Can anyone become successful at Sudoku?”

“Yes, with practice and the right strategy,” Snyder responded.

“How does Sudoku help you in other areas of life?”

The Sudoku expert responded, “In many ways…in life you have to know your task, have the right strategy, constantly observe, adapt, explore new ways to do things, and relax under pressure.”

Today I attended the Mind. Body. Spirit. Expo in Philadelphia and heard one of my heroes, Dan Millman give a lecture. Tune in tomorrow for details.

By the way, if you missed the Tseng Performance Academy shout-out in SportsIllustrated.com this week, click here: http://sportsillustrated.cnn.com/2009/writers/jon_wertheim/10/21/exhibitions/index.html

MESSAGE #1301 HOW TO BE MENTALLY TOUGH: FACE YOUR FEARS