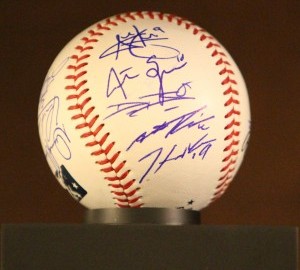 This summer, I spent quite a bit of time at Waterfront Park, home of the Trenton Thunder, Double-A Yankees.

I took photos on the field.

I was in the clubhouse.

I was in the press box.

I became friends with players.

I sat in the first row.

I went to the player picnic.

I saw Brandon Laird hit for the cycle with a walk-off home run.

I even threw out the first pitch and proposed to my girlfriend, Sarah.

It was a great season, however the Thunder came one game short of winning the championship. It was a shock and it was sad walking away from the ball park and ending the season like that.

But not as sad as the passing of a dear friend’s son.

Or as sad as people losing their jobs, or getting divorced.

Or a high school teacher taking his own life.

Things happen. We can’t control that.

We can only control our reactions to those situations.

Thank you for the memories, Trenton Thunder players, fans and staff.

See you next summer. 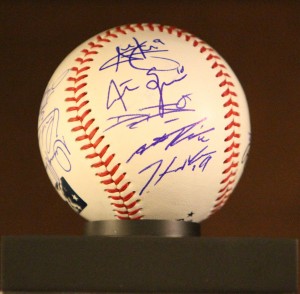 MESSAGE #970 HANGING OUT WITH BOBBY VALENTINE

MESSAGE #632 I KNOW WHO YOU ARE COMPETING AGAINST NEXT...

MESSAGE #1508 A MESSAGE FROM VINCE LOMBARDI