Today’s message is especially dedicated to the great Brandon Laird of the New York Yankees.

On Sunday night, Brandon Laird was promoted from Double-A Trenton Thunder to Triple-A Scranton-Wilkes Barre Yankees. He went home, packed his bags and left the next morning to meet his new team in Syracuse for his Triple-A debut Monday night.

He then proceeded to go 4-for-4 with two home runs.

How did he do it?

He didn’t act how he felt. In the time that I spent with Brandon this season, I figured out one of his secrets.

When he is in a pressure situation, he takes a few deep breaths and tells himself that he’s been in this situation before, then “just does it.”

The first pitch he swung at went over the right-center field wall. Laird then hit two singles and another home run over the left field wall.

“I was just getting pitches to hit and putting good swings on them,” Laird said. “I know my zone. I look for my pitch. I got it a few times tonight. Hitting all over the field, that’s what I wanted to do.”

“I just wanted to put a consistent approach together, learn how they pitch me, how they pitch the players in front of me,” Laird said of trying to transfer that success. “Earlier in the game, I was (nervous). After that first at-bat, I settled down a little bit.”

Notice how many times Laird said the word, “just.”

The first time I spoke with the Yankee prospect, I asked him about his best home run. He gave a similar response, using the word “just.”

I then reached into my pocket and took out a folded piece of paper and showed it to him.

Am I psychic? No, I just know what it takes.

In peak performances, the athlete has a simple approach (something he can control) and then just trusts his swing.

Yogi Berra once said, “You can’t think and hit at the same time.” 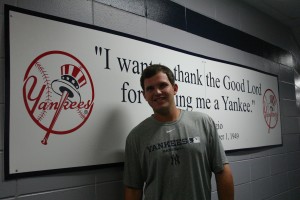 Laird next to the clubhouse before his last game in Trenton 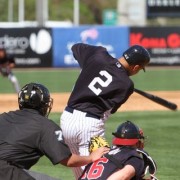 MESSAGE #1293 ARE YOU HELPING OR ARE YOU HURTING?

MESSAGE #1105 3 WAYS TO PERFORM UNDER PRESSURE

MESSAGE #1107 A QUOTE FROM ARTHUR ASHE
Scroll to top