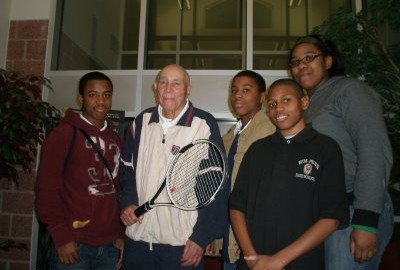 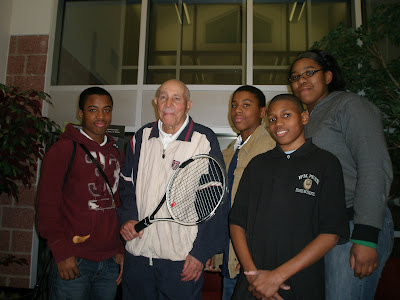 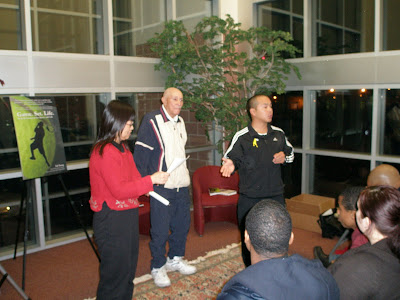 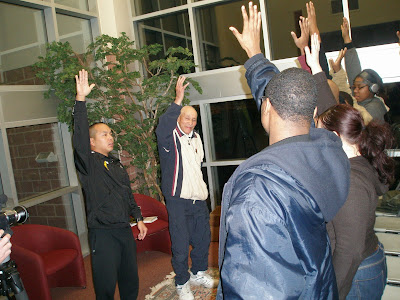 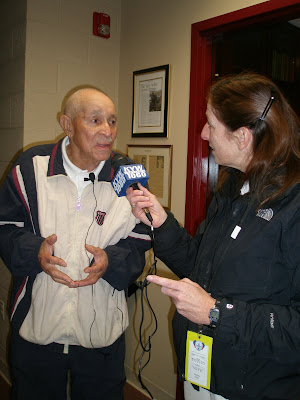 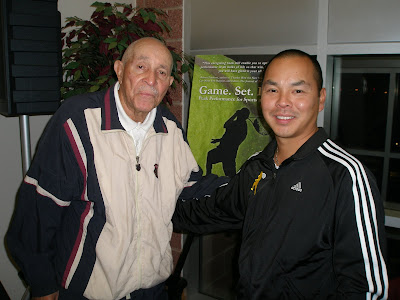 Today’s message is especially dedicated to all the student-athletes, coaches, staff and parents at Arthur Ashe Youth Tennis and Education in Philadelphia.
So yesterday I gave a talk with the great Bob Ryland at Arthur Ashe Youth Tennis and Education. We started at the nearby NBC studios with a live segment on the 4pm news. From there, we drove back to AAYTE for interviews with Brad Nau of Comcast SportsNet and then, Johannah Bennett brought some kids over for a meet and greet session and another interview. KYW radio also stopped Bob on the way up to our talk for some brief words.
Bob began talking about his life and the lessons he has learned. We have all read about blacks and segregation and tennis in the history books, but last night, about 80 people in Philadelphia heard it live from someone who lived through it. I have heard his story many times and it never fails to amaze me.
There were three television stations there, some newspapers and photographers, as well. Bob and I talked about the mental side of tennis and life. I asked him if he was nervous, and he replied, “I’m nervous all the time.” So if a living legend can be nervous, it’s okay for you to be nervous, just don’t show it.
Character was one of the topics we talked about, being a good person. Working hard. Listening. Mr. Ryland went through hell, but he still has character. A lot of character. It’s a major commitment for an 88 year old man to drive from New York City to Philadelphia, but he did it to talk to the kids. To make a difference. He’s leaving a legacy. Mr. Ryland was handed an honorarium check from Eric Dolaway, program director, for his time and travel. Guess what?
He handed it back and said, “Use if for the kids and your program.”
That’s character.
Thanks for reading.
https://www.edtseng.com/wp-content/uploads/2013/06/P12224362.jpg 300 400 admin https://www.edtseng.com/wp-content/uploads/2013/06/TsengLogo211-2.png admin2009-01-23 16:01:002009-01-23 16:01:00MESSAGE #543 ARTHUR ASHE'S HERO AT ARTHUR ASHE'S PLACE...

MESSAGE #1569 A MESSAGE FROM JOHN WOODEN