Tag Archive for: act as if

I have recently worked with an elite athlete who was in a slump. They were not performing at their peak.

Most slumps are in athletes’ heads. They try to change their technique, but that doesn’t help.

They need to change their minds.

When you are in a slump, you go into the competition expecting to fail.

When you are on a streak, you go into the competition expecting to succeed.

So how do you get out of a slump?

Act As If It Were Impossible To Fail

Go into the competition (or school, or work, etc) and act like the person you want to be.

Then tell me what happens. 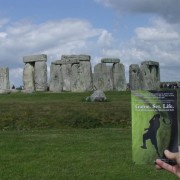 Here’s a an easy mental toughness tip that you can instantly start to use.

I can tell you to try to feel confident, happy and positive, but you may not be able to.

But I can say smile, or act like the most confident person in the whole world and you can. The beauty of this is that even if you have to fake it at first, soon you will feel it.

Congratulations to Rafael Nadal and Francesca Schiavone and a special thank you to the great Angie Holmberg who snapped some great shots of Game. Set. Life. on her recent trip to London and the French Open. See below. 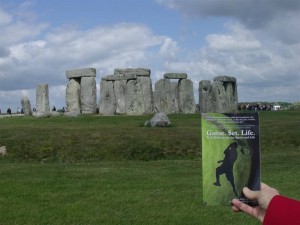 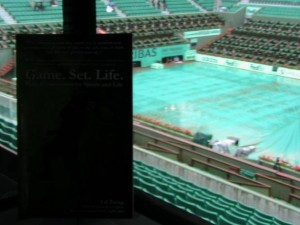 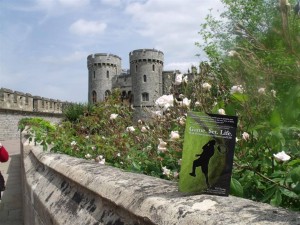 Well, I leave for the airport in a few minutes to hop a flight to Ft. Lauderdale, Florida.

Tomorrow morning I will be speaking at the USPTA Florida Convention to tennis coaches, directors, club owners and administrators at the Ocean Reef Club in Key Largo.

I will be nervous.

Do you get nervous before a big match? A presentation at work? Asking someone out on a date?

Pete Sampras used to get nervous all the time. In fact, he used to get so nervous before finals that he would throw up in the locker room.

But why was Sampras able to perform the way he did?

Because he didn’t act how he felt.

So tomorrow morning at about 9:30am I will be getting nervous.

But at 10am, I am going to ACT like I’m going to rock the house.

Next message from sunny (hopefully) Florida.

In this video blog, Ed Tseng, Pro of the Year USTA 2005 and author of “Game. Set. Life.” shares a great story about “acting as if” and peak performance in sports and life.

Dr. Jim Loehr once watched hundreds of hours of videotape of professional tennis matches and noticed a difference between the champions and everybody else. The difference wasn’t talent or skills, but what they did in the 15-20 seconds between points.

“Champions like Chris Evert…kept their heads high even when they’d lost a point, maintaining a confident posture that telegraphed no big deal. Loehr nicknamed this ‘the matador walk’ after a Spanish matador told him, ‘The most important lesson in courage is physical, not mental. From the age of 12, I was taught to walk in a way that produces courage.’

The tennis champions like Evert would next concentrate their gazes on their rackets or touch the strings with their fingers and stroll toward the back court–focusing, avoiding distraction, relaxing, and effectively letting the past go. After this mini-meditation, they’d turn back toward the net, bounce on their toes, and visualize playing the next point.” (Source: Psychotherapy Networker; “Living on Purpose” by Katy Butler)

How you act is how you are going to feel.

Act how you want to feel and you will feel the way you act.

“You can have anything you want if you will give up the belief that you can’t have it.”
-Dr. Robert Anthony

I once taught a very nice, young man, who was an average tennis player. He progressed, but slowly.

If he got to the courts after a bad day at school, it showed in his tennis.

One day, I sat him down and talked to him for a couple minutes on the principle of “Act as If.”

Act how you want to feel, not how you feel.

Act as if it were impossible to fail.

I said that it’s okay to feel tired, or in a bad mood, but just don’t look it.

You don’t have to act how you feel.

It was almost like a light went off in his head. He started dancing around like a boxer, smiling and hitting the fuzz off of the ball.

His belief in himself.

I later found out that he was getting bullied in school also. 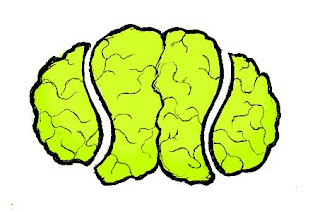 “Human beings, by changing the inner beliefs of their minds, can change the outer aspects of their lives.”
-WILLIAM JAMES
Today’s message is especially dedicated to the great David Ostermann Gartner from Slovenia.
Yesterday I talked about acting differently than how you feel.
This is one of the keys to peak performance in sports, and life.
“Act as if” is also one of the principles that I talk about in my book. Most people only use a fraction of the potential that they have. Why? Because they think, “I can’t” more than they think, “I can.” They act according to how they feel. But it doesn’t have to be that way.
In Eastern philosophy, when you are pushed, you pull and when you are pulled, you push. You should fight fire with water. You should fight anger with love. And you should fight “I can’t” with “I can.”
I know what you’re thinking, “How can I do this?”
It’s easy…
Act as if…it were impossible to fail.
That’s all.
Thanks for reading.
https://www.edtseng.com/wp-content/uploads/2013/06/tennisbrain%5B1%5D2.jpg 212 320 admin https://www.edtseng.com/wp-content/uploads/2013/06/TsengLogo211-2.png admin2009-08-04 11:19:002009-08-04 11:19:00MESSAGE #739 CAN YOU? OF COURSE YOU CAN...