All successful people know that failing is part of life. Someone once said, “The granite block in the path of normal people, is a stepping stone for the great.” I don’t believe in failure, just results. You can learn more from a loss, than from a win. As a tennis player, I don’t mind losing, because I know I can improve from what I have learned. Most players/people focus on winning, and when they don’t win, they become depressed. If you learn from your losses, you will not only improve, but you will prevent the negative thoughts. Remember, it’s the journey, not the results.

Homework: Next time you fail, look at what you did wrong, make your adjustments the next time you do it and you will succeed. Remember, it’s not how many times you fall down, it’s how quickly you get back up.

Message # 97 Seeking Out the Experts

Message # 83 A Lesson from Vince Lombardi

MESSAGE #353 ARE YOU A LEADER OR A FOLLOWER? 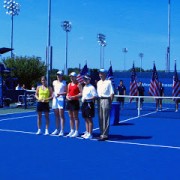 Message #163 Lessons From the Pro Tour

It’s All in How You React…
Scroll to top