Blog
You are here: Home / Blog / Uncategorized / Message #180 THE ONLY STORY YOU NEED TO KNOW ABOUT SPORTS PSYCHOLOGY&#...

Today’s message is especially dedicated to the great Ben Zislis.

Once upon a time, there was a tennis player. This tennis player was playing on his high school team. Well, one day, his coach says, “I’m going to move you from Varsity to Junior Varsity.”

The player said, “Alright, but why?”

It was at that moment that the tennis player thought, “NOBODY is EVER going to call me lazy again in tennis.”

So he went down to JV and all he did was become the most ENERGETIC player on the team. He started hustling and really working hard. He was playing better and really pumping all the other teammates up. After a match one day, an older gentleman approached the young man. “Son, I like what ya got. How would you like a scholarship to Harvard University?”

This young man went on to Harvard, graduated and began working. Well, he got a job as a sales person for some big time company, and worked for a few months. Then one day he got fired. So he went into his boss’ office, and said, “Why did I get fired?”

So the young man thought to himself, “NOBODY is EVER going to call me lazy again in sales.”

He didn’t change anything in his selling approach.

He didn’t learn anything new about sales.

All he did was become the most energetic sales person.

He went on to become a very successful salesperson.

In order to INSTANTLY improve at what you do, just INCREASE your energy.

It could be at tennis, work, relationships, teaching, telling a story, public speaking…anything.

MESSAGE #375 HANGING OUT WITH ROCK STARS

MESSAGE #323 DO WHATEVER IT TAKES 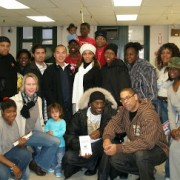