Blog
You are here: Home / Blog / Uncategorized / MESSAGE #492 A DAY WITH A LIVING LEGEND… 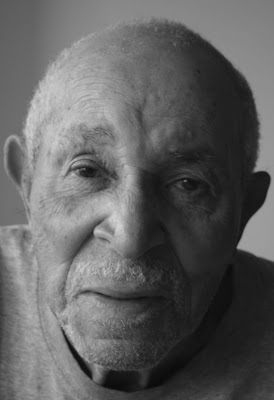 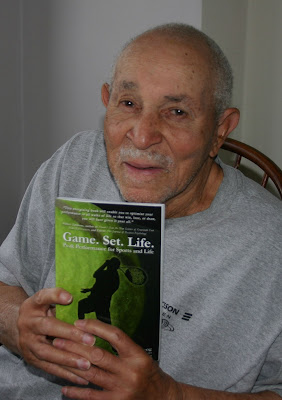 Bob’s wife Nancy said he couldn’t put the book down! 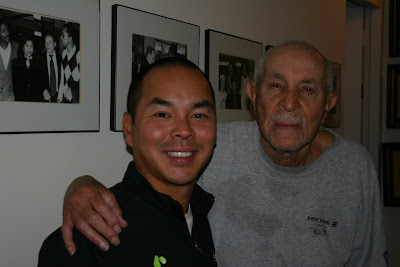 New friends. Notice the photos of Bob and Arthur Ashe in the background. 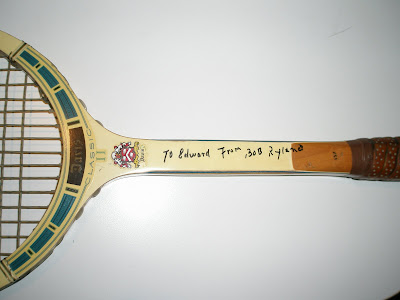 A wonderful gift from the great one.

So yesterday I spent the day with Bob Ryland. I don’t know where to begin. It’s amazing enough that he was the first black professional tennis player. But he was also Arthur Ashe’s hero. He coached the Williams sisters, and travelled around the world as Bill Cosby’s personal tennis coach.

I went to Mr. Ryland’s apartment on the Upper West Side of New York City to talk about the book he wants me to help him write. I hit the record button on the brand new bright white digital recorder as the 88 year old tennis legend talked about his life, on and off the court. He brought me back in time to his early days in Alabama around the 1920s. He was called racist names and frequently saw blacks “strung up” in the trees outside his front door while walking to school in the morning. He really had to sit in the back of the bus, and if it was too full, he had to either stand or get off. They had separate bathrooms and water fountains for blacks. And in college, the black players had to wait until night to sneak into the dorms to sleep. The white boys on the tennis team went into the shops to get them food and brought it to them. And yes, he almost got killed several times.

I have read about those days in the history books, but Bob Ryland lived those days. If Bob was a bitter man, I probably wouldn’t blame him, but he says, “I’m just a regular guy. I overcame adversity and became better because of it.”

So Bob knows the importance of overcoming adversity and how hard work beats talent, but the thing that really stuck with me is that Bob really is just a regular guy.

I asked him what the most important lessons he has learned in his life and he said: be a good person, listen, and smile.

He didn’t mention anything about tennis…a regular guy?

I don’t think so.

None of my blog readers should ever complain that their life is tough.

” ‘Game. Set. Life.’ can help you accomplish whatever you want in life and teach you how to stay ahead of the game, concentrate, focus, and give you confidence. I wish I had read this book when I was playing.”
-BOB RYLAND, December 2, 2008, New York City

Checkout “Game. Set. Life.” in The Daily Racquet in Hawaii…