If you play the game like that-one pitch, one hitter, one inning at a time-the next thing you know you look up and you’ve won.
-RICK DEMPSEY, major league catcher

Present-moment focus is the key to peak performance on and off the field.

Like Rick Dempsey says, when you focus on one pitch, one hitter or one inning at a time, you are focusing on the “process” and as a result, you will get a better “product” which is winning.

Today I did a demonstration with a tennis pro. I had him hold one hand up, then said, “Catch!” I proceeded to throw two balls to him simultaneously and he only caught one.

It was a set-up. Nobody can catch two balls at one time.

Nobody can perform well when they are thinking about the last pitch they missed, or in tennis, the last shot they missed. Many athletes are playing several points at a time and that never works.

Let go of the last pitch or the last point. You can’t change it. Focus on the current pitch or point and that will give you your best chance at winning.

In sales, give your full, undivided attention to your conference call, instead of checking your email or organizing your office.

I think you get the point.

Now go out and do it.

But I’m not one of those guys that has Sports Center on at my house 24/7.

There is, however, something that I can’t watch enough of…

The Davids beating the Goliaths.

I love watching the little guys beat the big guys.

Because it shows that anything can happen.

On paper, Soderling should have won, but he didn’t.

Upsets are part of sports (and life) but many people are defeated before the competition even begins. They think, “Oh, he will probably win.” or “There is no way that team will lose.”

There is a way and it is possible.

So the next time you are the underdog and you come up against a tough opponent, a tough customer, or a tough situation, remember that anything can happen.

Everyone knows what to do, but nobody does what they know.

Today’s message is especially dedicated to the great Lewis Howes, founder of Sports Networker and author of LinkedWorking.

Lewis Howes is my friend, and he is a rock star. He is an ex-pro athlete, author, speaker and entrepreneur. Howes travels all over the world educating and connecting people in sports and social media. He has networked with some of the top minds on the planet…and he’s just getting started.

The difference between Lewis Howes and everyone else is that Lewis is taking action…MASSIVE ACTION. In fact, he’s doing a webinar tomorrow from the beach in Argentina (I’m not happy about that).

See, you know what to do, but you’re not doing it.

You know you need to:

K – A = O (Knowledge minus Action equals NOTHING)

Recently, I was teaching and one of my students kept hitting the ball into the net. I asked, “How can you make an adjustment?” She said, “Aim higher over the net.”

“Very good, but ARE YOU trying to aim higher over the net when you’re hitting?”

The response was “No.”

We all know what to do, but the great ones are actually doing it.

What are you NOT doing? Leave your comments below…

If you would not be forgotten, as soon as you are dead and rotten,
either write things worth reading, or do things worth writing.
-BENJAMIN FRANKLIN

My only question to you is…

ARE YOU GOING ALL OUT?

If you’re a writer, write things that are worth reading. But if you’re not a writer, do things worth writing about.

I may not know you, but I know THIS about you…

1. You have unlimited potential.

2. All of the ability is already inside you (you just have to discover the strategy).

3. You can learn any skill, mental or physical.

4. You can’t win when you’re focused on winning.

5. You don’t have to be great at the start, but you need to start to be great.

So today is the only day that matters. Why?

Because you can only live one day at a time.

Make every day the most important day of your life.

Make every practice the most important practice of your life.

If you do this, I’m sure you will be pleased with the results.

Go all out today!

Think back to a “good day” in your sport. Visualize what went on before, during and after that peak performance. Re-create those feelings and actions.

Now go back to a “bad day” that you had. Visualize what went on before, during and after that poor performance. Re-create those feelings and actions.

The difference is always in your head.

So what does this mean?

It means you have to be mindful of your self-talk during practice and competition.

Instead of breaking yourself down, build yourself up. 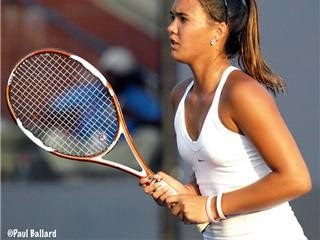 I spoke with Kristy recently and asked her the following questions…

E:What are your short and long-term goals?

K:My future goals are to finish college while hopefully winning the NCAA tournament and also playing pro circuit events. After I graduate, I would like to play professional tennis, full-time.

E:What in your eyes are the keys to success on the court?
K:Determination, natural talent, and good resources.

E:How has tennis helped you in other areas of life?
K: It has mostly helped me be really independent, and it helped me be focused on other aspects of life because I know if you can put that much effort into one thing, you can do it in other things as well.

Was Kristy Frilling born to be a tennis player?

No. She was trained to be a tennis player. That means, if you work hard and work smart, you too can do anything you want. The key point that stayed with me that Frilling said was “if you can put that much effort into one thing, you can do it in other things as well.” Make the EFFORT and get the RESULT. Be on the lookout for Kristy Frilling.

I tell people all the time, to have a “Joe DiMaggio Day.”

When the great Joe DiMaggio was playing for the New York Yankees, there was a meaningless game at the end of the season, after the Yankees had already clinched a post-season spot. He played like he normally did – all out.

After the game, Joe D was interviewed and the reporter asked, “Hey Joe, this game was a ‘nothing’ game…why did you try so hard?”

“Today, there could have been one person seeing me play for the first time…I owe it to them to do my best.”

Every lesson I teach, I give it my all, as if it’s their first lesson with me. Every motivational talk I give, I pretend that it’s my first. When I worked at the Princeton Racquet Club, I taught every lesson as if my bosses were on the court watching, even if they weren’t even in the building. And every morning, I write my blog in hopes that I can affect just ONE person out there. I think I can, but I don’t know for sure.

YOU NEVER KNOW WHO YOU’RE AFFECTING…

I love writing my blog every morning, and in my own weird way, I think I’m changing the world, but I don’t know unless someone tells me. This morning, someone told me…

My name is ________ and I am from __________. I’m 21 years old and I just spent the past 2 years in college in the U.S. playing college tennis in a Division 1 school. I ended last year inside the top 50 and I left college after last semester to pursue my childhood dream of playing professional tennis-A decision I am very happy with…

I’ve been reading your blog on and off for the past year and am just writing to thank you for all your inspirational/motivational messages. I turn to your page whenever I need a lift. I’ve had quite a few obstacles over the past year or so and reading your blog/quotes definitely helped me. I think you are an incredible person with a lot of love for the world, it’s good to know there are good people out there… I’m ranked in the 600’s in the world now and believe I can go very far. My ultimate dream is to be top 100 so I can play the slams and slowly but surely it’s becoming a reality…

Anyway, I’m sure you’ve got a million messages to read every morning so I’ll sign off. I’ve no doubt our paths will meet in the future at some pro tennis tournament. I will definitely be playing some challengers in California at some point. Thank you so much for everything man and keep on spreading the love!

P.S. I know you like to put down people’s names in your blog but I’d prefer it if you didn’t use mine. Maybe when I make top 100 though! 🙂

Thanks for reading…and have a Joe DiMaggio Day…