“Everyone faces mental challenges on the court. The key to overcoming them is to zero in on what is within your ability and ignore the rest.”
-NICK SAVIANO, author of “Maximum Tennis”

I was intrigued and asked Linda who this was. It turns out this sports psychologist was the late Father Joe DiSpenza. So I did some research and couldn’t find anything about this supposed mental toughness pioneer. No books. Very little trace. But then I saw that the great Nick Saviano, one of the top tennis coaches in the world, wrote about Father Joe DiSpenza in the acknowledgements of his book, “Maximum Tennis.”

So I called Nick.

Nick and I had a great conversation and he told me about Father DiSpenza. Supposedly, the deal was that Father DiSpenza would work with you, so long as you didn’t tell anyone. He didn’t want any publicity. And he didn’t accept payment. Travelling all over the world, Father DiSpenza was a sought-after speaker making a lot of money, most of which went to the charities that he founded. He lived a modest life. He just wanted to help others.

But here’s the sad part. When Father DiSpenza became sick and eventually passed away in 1992, he had all of his information destroyed.

I totally respect the fact that Father DiSpenza did not want any publicity or payment for his work. But why burn all of the research in your life’s work? Why not write a book and share it with others? I don’t know, perhaps he wanted others to figure it out on their own. I’m sure he had a good reason.

The principles in Chapter 7 of Nick Saviano’s “Maximum Tennis” is a direct influence of the late, great Father Joe DiSpenza.

13 Psychological Secrets of the Champions

1. Focus only on those things that you can control and disregard the rest.
2. Winning is not the number-one goal when you are competing.
3. Emphasize performance goals to achieve outcome goals.
4. Cultivate intrinsic motivation and de-emphasize extrinsic motivation.
5. Stay in the present.
6. Project a powerful, positive presence.
7. Engage in positive self-talk.
8. Breathe.
9. If you can’t visualize it, chances are it will not become a reality.
10. Maintain your routines.
11. Don’t make it personal.
12. It’s okay to be nervous; just don’t be afraid.
13. Practice under pressure.

The greatest athletes in history used some or all of the principles above. Your physical skills will take a while to develop, but you can instantly become better by using the same mental secrets that the champions use.

MESSAGE #396 DO THIS AND YOU'LL BE BETTER THAN EVERYONE ELSE... 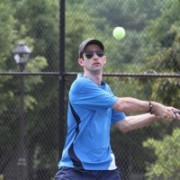 MESSAGE #756 A MESSAGE FROM ANTHONY ROBBINS…
Scroll to top