You are here: Home / Blog / potential

When you plant bamboo seeds, nothing happens for the first year. Or the second year, the third year, or the fourth. But in the fifth year, the bamboo tree does something amazing – it will grow about two and a half feet every day for six weeks until it is approximately ninety feet tall.

You are a bamboo tree. You are germinating right now.

And one day you will shock the world.

Think back to the best match you ever played.

Notice how you didn’t have many thoughts going on in your head?

You just did it.

Now think back to the worst match you ever played.

Notice how you kept thinking things like, “why do you keep missing that shot?!” “what’s wrong with you?!” “you stink!”

You have all the potential in the world already inside you.

If you can subtract the interference (fear of failure, focus, results, other people, pressure, what you’re eating later, etc), you will perform at the highest level.

I know what you’re thinking, how can I get rid of the interference?

There are many ways, here’s one:

Do what Pete Sampras used to do…

For a free 10-minute mental toughness consultation for athletes, salespeople, students…anyone that wants to reach peak performance, email or call 609.558.1077.

I am currently reading the latest issue of Time magazine, entitled, “The 100 Most Influential People in the World.”

I like to think that I will be in that issue one day; not because I want to say that I have that title, but because I truly want to make as big of a difference in the world that I can.

And you can too.

I know what you’re thinking, “What if I don’t want to be an influential figure? What if I’m happy with what I have?”

Then by all means, continue with what you are doing.

But the wrong mindset is that it is not possible. It is possible.

It won’t happen overnight, but if you figure out the right strategy, put in the work and truly have a passion for it…the sky’s the limit.

It doesn’t matter if you’re a tennis player, musician or accountant; you have unlimited potential.

My friend Bob Ryland, the first black professional tennis player used to coach the Williams sisters, and the first thing I ever asked him was, “Were they more talented than everyone else?”

“No, in fact I didn’t think they were talented at all at first, but they worked harder than anyone else (from 6am-6pm, with breaks of course).”

Yes, talent and physicality help, however, they are not the determining factors.

Your potential is unlimited.

So here I am at the hotel in Orlando getting ready to start a two and a half day workshop on mental toughness at the Human Performance Institute created by the great Jim Loehr, who has worked with Pete Sampras, Monica Seles, Jim Courier and many more.

I did not sleep at all. I was too excited about learning, networking and whatever else the next 2.5 days have in store. But I feel good. I feel REALLY good. In my insomnia, I read a great story from “Zen Golf” by Dr. Joseph Parent. Here it is…

A young man had a clay statue, a family heirloom. He’d always wished that it were bright shiny gold instead of plain brown clay. When he began to earn a living, he put aside a little now and then, until he had enough for his special project: to have his statue covered with gold.

Now it looked just the way he wanted it to, and people admired it. He felt very proud that he had a gold statue. However, the gold-plating didn’t stick to the clay very well, and it wasn’t long before it began to flake off in spots. So he had it gold-plated again. Soon he found himself using all his time and resources to maintain the gold facade of his statue.

One day his grandfather returned from a journey of many years. The young man wanted to show him how he had made the clay statue into a gold one. However, clay was showing through in many spots, so he was somewhat embarrassed.

The old man smiled and held the statue lovingly. With a moist cloth he gently rubbed it and gradually dissolved some of the clay. “Many years ago, the statue must have fallen in the mud and become covered with it. As a very young child, you wouldn’t have known the difference. You forgot, and thought it was just a clay statue. But look here.”

He showed his grandson the place where the clay was removed, and a bright yellow color shone through. “Underneath the covering of clay, your statue has been solid gold from the very beginning. You never needed to put more gold on to cover the clay. Now that you know what its nature really is, all you have to do is gently remove the clay and you’ll reveal the gold statue you’ve possessed all along.”

You have all of the ability and all of the gold already inside you…you just have to discover the strategies for success.

Work hard, focus on the positive and start removing the clay that has built up from years of conditioning and negative events. Don’t let society, others and your own thoughts tell you what your potential is. I already know what it is…

Today’s message is especially dedicated to the great Laura Mosiello.

What does this quote mean?

Here’s another type of Apple – I recently got an iPhone and I absolutely love it. I know many Apple users and they all agree that their customer service is by far the best. Below is a great quote, this time by Apple co-founder and CEO, Steve Jobs.

Your time is limited, don’t waste it living someone else’s life. Don’t be trapped by dogma, which is living the result of other people’s thinking. Don’t let the noise of other’s opinion drowned your own inner voice. And most important, have the courage to follow your heart and intuition, they somehow already know what yo truly want to become. Everything else is secondary.

Every game is an opportunity to measure yourself against your own potential.
— Bud Wilkinson 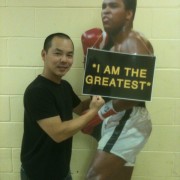 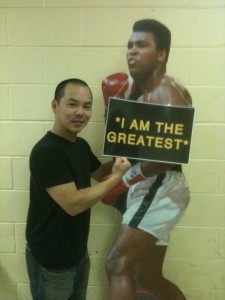 Count how many times the letter “F” appears in the following:

FINISHED FILES ARE THE RESULT OF YEARS OF SCIENTIFIC STUDY COMBINED WITH MANY YEARS OF EXPERIENCE.

How many “F”s did you find?

Most people find between two and five. The answer is six! Go ahead, count again.

We have something called a scotoma (blind spot) and we miss the “F”s in “OF” because it sounds like “OV.”

What does this have to do with you?

You may not see your potential. Well, I’m here to tell you that you have unlimited potential. ANYTHING is possible. Do what Muhammad Ali did…

If you would not be forgotten, as soon as you are dead and rotten,
either write things worth reading, or do things worth writing.
-BENJAMIN FRANKLIN

My only question to you is…

ARE YOU GOING ALL OUT?

If you’re a writer, write things that are worth reading. But if you’re not a writer, do things worth writing about.

I may not know you, but I know THIS about you…

1. You have unlimited potential.

2. All of the ability is already inside you (you just have to discover the strategy).

3. You can learn any skill, mental or physical.

4. You can’t win when you’re focused on winning.

5. You don’t have to be great at the start, but you need to start to be great.

So today is the only day that matters. Why?

Because you can only live one day at a time.

Make every day the most important day of your life.

Make every practice the most important practice of your life.

If you do this, I’m sure you will be pleased with the results.

Go all out today!

“Your past is not your potential.”
-author unknown

The other day I had a kumquat. The kumquat is a citrus fruit that originated in China and basically looks like a small oval orange with seeds.

Anybody can count the number of seeds in a kumquat.

Nobody can count the number of kumquats in a seed.

You have unlimited potential. Don’t let anybody tell you what you can and cannot do.