Blog
You are here: Home / Blog / Attitude / MESSAGE #1561 A MESSAGE FROM MICHAEL JORDAN

When I give seminars on the psychological aspect of peak performance, I always ask someone in the audience to name their favorite athlete. Many times it is Michael Jordan. I then ask the following questions…

“Who is faster, you or Jordan?”

“Who can shoot better, you or Jordan?”

“Who can jump higher, you or Jordan?”

The answer is always Jordan (if they are being honest).

I then ask how long it would take for them to be physically equal to Jordan.

I follow up and say, “Do you know how you can become just as good as Jordan, almost instantly?”

I have the entire auditorium’s attention as I say…

I recently asked the winningest coach in college history, Paul Assaiante, squash coach at Trinity College, if giving a full effort was one of the main goals for his team. He responded…

Comments? Leave them below. 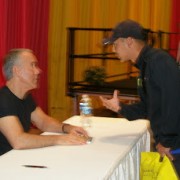 MESSAGE #396 DO THIS AND YOU'LL BE BETTER THAN EVERYONE ELSE...